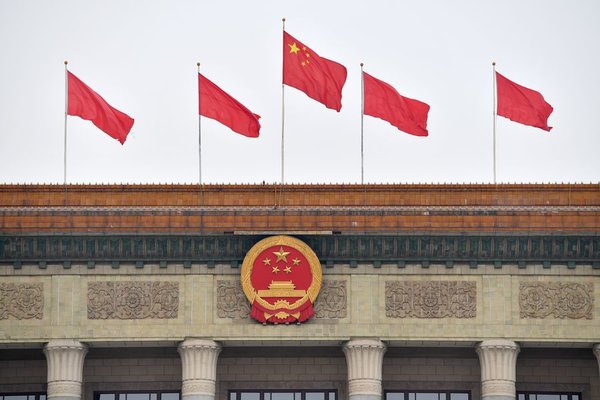 Photo taken on May 21, 2020 shows a view of the Great Hall of the People in Beijing, capital of China. [Xinhua/Li Xin]

BEIJING, May 21 (Xinhua) — China's national legislature will open its annual session on Friday morning in Beijing, a spokesperson said Thursday.

The third session of the 13th National People's Congress (NPC) is scheduled to conclude on May 28, with nine items on its agenda, Zhang Yesui, spokesperson for the session, told a press conference.

Lawmakers will deliberate six reports including the government work report, as well as the draft civil code, Zhang said.

They will also deliberate the bill put forward by the NPC Standing Committee on reviewing a draft decision of the NPC on establishing and improving the legal system and enforcement mechanisms for the Hong Kong Special Administrative Region to safeguard national security, Zhang said.

Press conferences, press briefings and interviews of deputies and ministers will be held during the session via video link, he said, adding that preparations for the session have been completed.