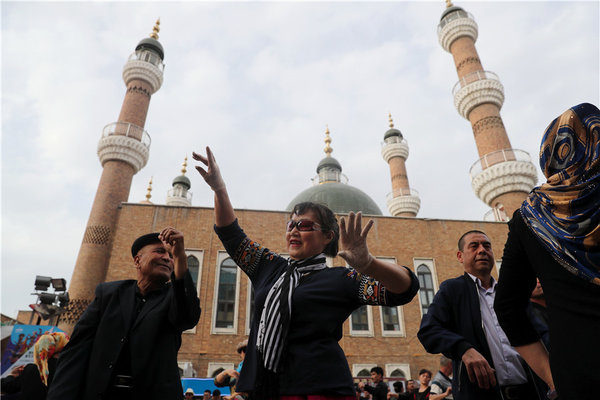 Local residents dance at the International Grand Bazaar in Urumqi, capital of Xinjiang, in April. [For China Daily/Wang Jing]

Facilities owned by companies from other parts of China have created jobs and improved people's livelihoods. Zhao Xinying reports from Urumqi.

Having benefitted from poverty eradication measures in the Xinjiang Uygur Autonomous Region, Abdurehman Yimin is now helping more people in his hometown to improve their standard of living.

"I'm trying to expand agricultural production and offer some job opportunities to local people," said the 68-year-old farmer from a small town in Shufu county in southern Xinjiang's Kashgar Prefecture.

"I'm also rebuilding three rooms of my house because I hope to open a supermarket to serve nearby residents," he said.

Abdurehman's family, consisting of his wife, two sons and two daughters, struggled with poverty for decades, living on an average annual income of just 5,000 to 6,000 yuan ($720 to $870) made by planting wheat and corn.

"At that time, we lived in a small adobe house where the roof leaked when it rained and dust flew indoors when the wind blew," he recalled.

Things started to change in 2014, when a series of poverty-reduction policies issued by the central government and local authorities came into effect.

Like many villagers in Xinjiang, Abdurehman received a subsidy from the local government. He rebuilt his shabby adobe home with bricks and installed modern conveniences such as a kitchen, a toilet and electricity.

He also bought some agricultural machinery, which helped to greatly raise crop yields.

Now, he plants wheat, corn and red dates, and can earn at least 15,000 yuan a year. Raising livestock, such as cows and sheep, can bring him another 20,000 yuan annually.

If the money earned by his children - some of whom are entrepreneurs, while others work for factories owned by the local government - is included, the family's total annual income exceeds 100,000 yuan, Abdurehman said, adding that the family was officially removed from a list of poverty-stricken villagers four years ago.

Erkin Tuniyaz, vice-chairman of the regional government, said 537,000 people from 513 villages in Xinjiang climbed out of poverty last year.

"More than 475,000 people in Xinjiang's urban areas found jobs with the government's help last year, and the registered unemployment rate was 3.3 percent."

That rate was lower than the national average of 3.8 percent. In south Xinjiang's Hotan Prefecture, at least 100,000 people found jobs last year, according to Erkin. About 500 companies from other provinces opened branches there to develop industries based on local resources.

As the social environment in south Xinjiang, where terrorists conducted attacks that killed and injured thousands of people, becomes increasingly safe and stable, more companies are opening facilities in Prefectures such as Hotan, he said.

Producing grow bags containing fungi spores and wood shavings that provide nutrition and support the growth of the spores, the company decided to set up a branch in Xinjiang because of the low costs resulting from the vast land and rich supplies of raw materials in the region, said Liu Minduo, Beiwei's vice-president.

For example, planting black fungus requires large areas of land, and Hotan has a wealth of land covered by saline-alkali soil. It cannot be used to grow crops and is usually left fallow, but black fungus can thrive in grow bags, rather than being planted directly in the ground, he said.

"In addition, the production of grow bags requires large amounts of wood shavings. Jujube and walnut, which have greater nutritional value than other types of wood, are ideal sources and can be found almost everywhere in Xinjiang," Liu added, noting that the company has contributed to the reduction of poverty in nearby communities since its arrival.

The company buys wood from local farmers for 300 yuan per metric ton, and has provided at least 120 jobs for local residents. It employs poor farmers to nurture fungi by giving them free grow bags, and it provides them with dividends after the harvest.

"So far, about 6,450 poor farmers in Lop county are engaged in fungi cultivation, with each receiving a dividend of 2,000 yuan a year," Liu said, adding that Beiwei is now expanding its operations to produce instant fungi (cooked fungi that can be eaten straight from the container).

"Our goal in coming here three years was to produce 100 million bags of instant fungi every year," Liu said. "If that happens, our business will be able to benefit more local people by offering them more job opportunities." 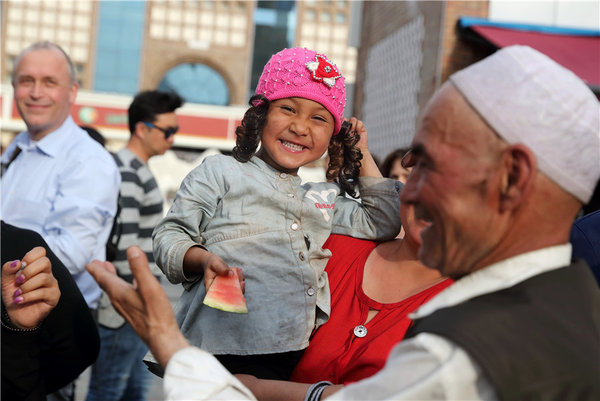 A child enjoys a performance in the International Grand Bazaar in Urumqi in April.  [For China Daily/Wang Jing/China Daily]

According to Erkin, to ease the financial burden of education costs the regional government provides access to high-quality education for all children, particularly those from impoverished families in southern Xinjiang.

After years of effort, almost every village in southern Xinjiang now has its own kindergarten, providing local children with preschool education.

In a beautifully decorated classroom at a kindergarten just a few hundred meters from Abdurehman Yimin's home, scores of children danced as a radio played Uygur and Mandarin songs.

Nurbeye Kaisa, the kindergarten's director, said the small facility was built in 2017, thanks to government investment of 4 million yuan. Now employing 18 teachers, the kindergarten provides services for 180 children ages 4 to 6, all from the Uygur ethnic group that makes up the majority of the local population.

Parents send their children to the kindergarten in the morning and pick them up in the afternoon. The children can spend the whole day at the facility enjoying different kinds of courses or activities conducted in both the Uygur language and Mandarin, such as singing, dancing, painting, playing games and making cookies. They also receive two meals and a dessert every day.

"Despite their young age, most of the children can communicate with the teachers or with each other in the two languages," Nurbeye said.

"Before the kindergarten was built, the local children were either cared for by their aging grandparents or they accompanied their parents to work on farms or in factories, which meant their safety and health could not be guaranteed," she said.

"At the kindergarten, they can have classes, meals and rest regularly in a cozy environment, and it doesn't cost (the family) a penny," she said, noting that the annual 2,800 yuan tuition fee for each child is paid by the local government. 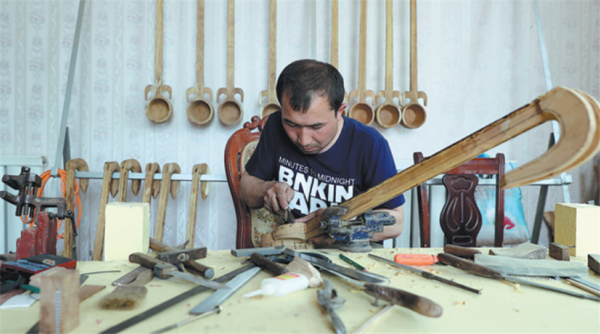 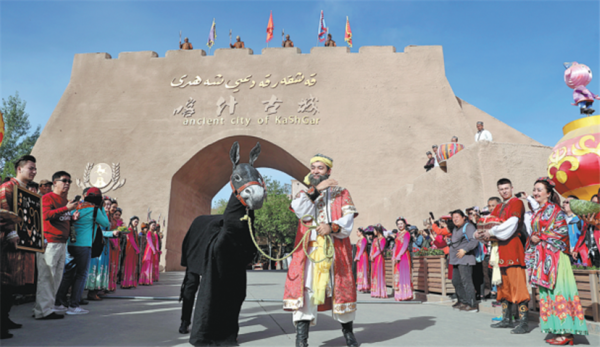 Tourists attend a daily welcome ceremony in front of the gate of the ancient city of Kashgar.   [For China Daily/Wang Jing]