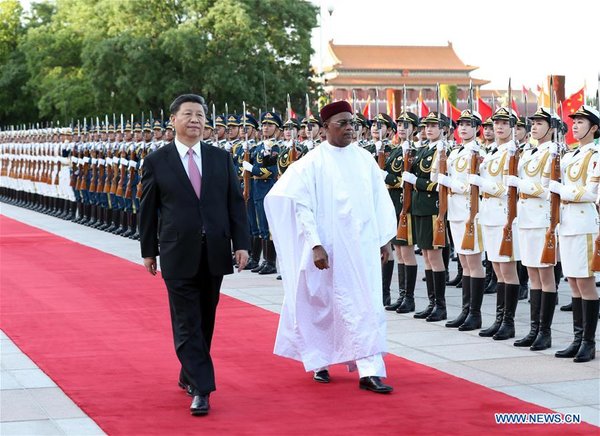 Chinese President Xi Jinping holds a welcome ceremony for Nigerien President Mahamadou Issoufou at the square outside the east gate of the Great Hall of the People before their talks in Beijing, capital of China, May 28, 2019. [Xinhua/Liu Weibing]

Xi said China stands ready to work with Niger to implement the outcomes of the Beijing Summit of the Forum on China-Africa Cooperation (FOCAC) to boost strategic cooperation and benefit the two peoples.

He called on the two countries to understand, trust and support each other on issues of core interests and major concern, and continue their exchanges in governance and development experience.

China and Niger should deepen synergy within the framework of the Belt and Road Initiative and FOCAC, Xi said, stressing the importance of carrying out key projects in infrastructure, people's livelihood, energy and agriculture.

He said China will continue to support Niger in fighting terrorism for regional peace and stability, and promote the UN support for the Group of Five Sahel joint force.

He also voiced his hope that China and Niger would expand exchanges in culture, youth, women and think tanks, so as to enhance the two peoples' mutual understanding.

"As long as all countries follow a development path suited to their own national conditions, cooperate in jointly building the Belt and Road, and move toward the goal of building a community with a shared future for humanity, we will surely achieve success," Xi said.

Issoufou congratulated on the 70th anniversary of the founding of the People's Republic of China and the great achievements the Chinese people have made in building socialism with Chinese characteristics under the leadership of the Communist Party of China.

China's development has contributed greatly to human society, Issoufou said, adding that China's inclusive economic growth has lifted a large number of people out of poverty and accelerated realization of the UN millennium development goal.

Niger speaks highly of China's adherence to the five principles of peaceful coexistence in international affairs and its long-term commitment to world peace and development, he said, adding the country supports the goal of building a community with a shared future for humanity.

The Belt and Road Initiative proposed by Xi embodies the concept of win-win instead of zero sum and it will benefit the whole world, the Nigerien president said.

As for China-Africa cooperation, Issoufou said African countries appreciate China's adherence to the principles of sincerity, real results, affinity and good faith, as well as the eight major initiatives put forward by Xi at the 2018 Beijing Summit of the Forum on China-Africa Cooperation.

Saying Niger would work closely with China in Africa's cause of peace and security and the process of modernization, Issoufou said Niger always sticks to the one-China policy and is willing to participate in the joint construction of the Belt and Road.

After their talks, the two heads of state jointly witnessed the signing of several bilateral cooperation documents.

Prior to the talks, Xi held a welcoming ceremony for Issoufou, who is paying a state visit to China from May 26 to 30. 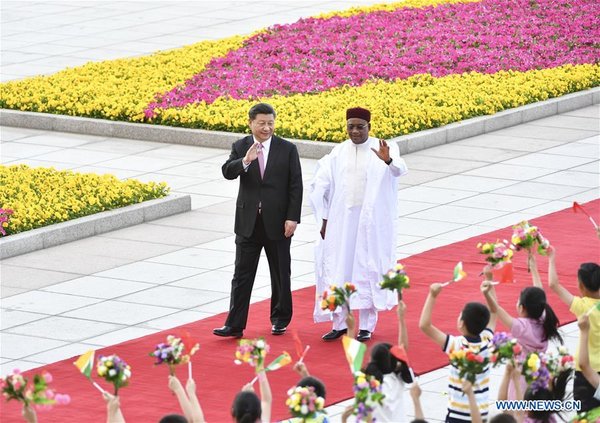 Chinese President Xi Jinping holds a welcome ceremony for Nigerien President Mahamadou Issoufou at the square outside the east gate of the Great Hall of the People before their talks in Beijing, capital of China, May 28, 2019. [Xinhua/Yin Bogu] 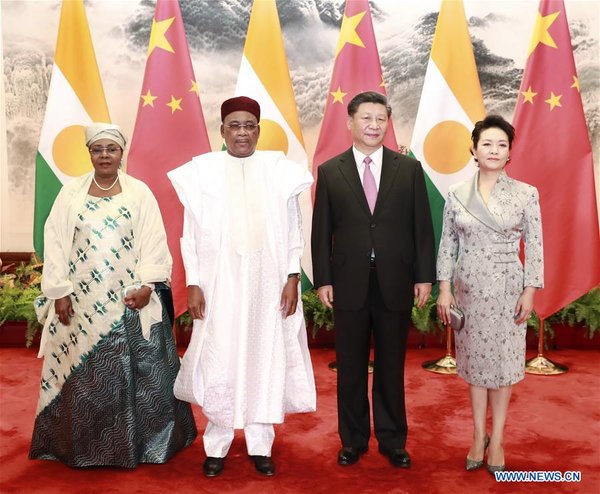