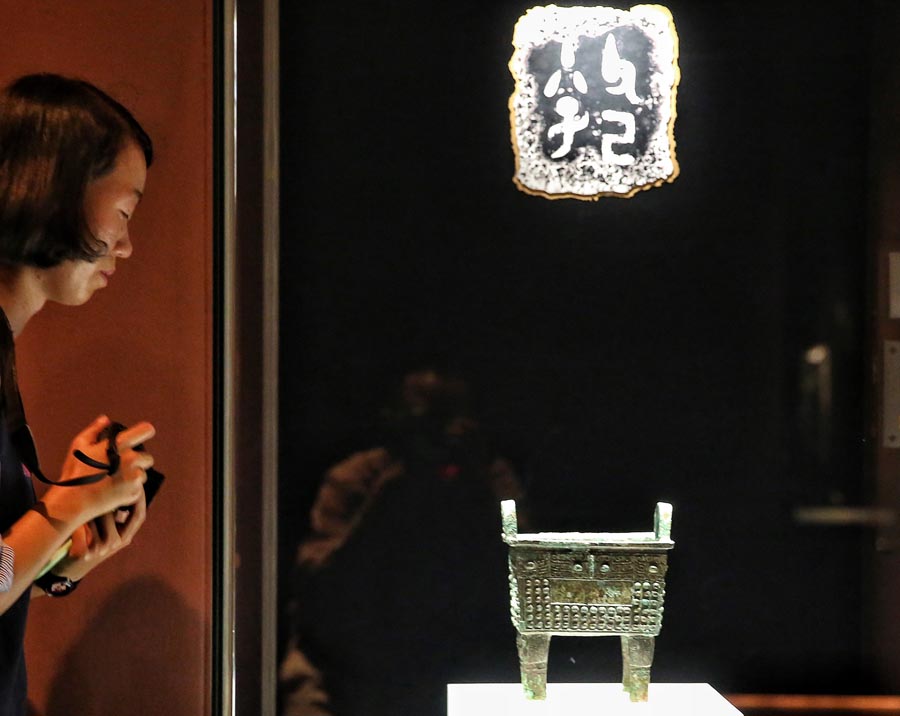 A Shang Dynasty (c. 16th century-11th century BC) square ding vessel is on show at an ongoing exhibition at the National Museum of China. [For China Daily/Jiang Dong]

An exhibition at the National Museum is presenting China's ancient writing system on oracle bones to a wider contemporary audience.

Late Chinese-French artist Zao Wou-ki said in the early 1950s that while Paris had an undeniable artistic influence on his work, he had also been gradually rediscovering China.

At that time, Zao had been living in the French capital for a few years after moving from Hangzhou, Zhejiang Province, where he taught at the China Academy of Art. While he was in awe of the vanguard of art movements prevailing in Europe, he was also inspired to return to his cultural roots.

"China is inherent in all my recent canvases. Paradoxically, it is to Paris that I owe this return to my profound origins," Zao said.

Specifically, he was referring to Chinese calligraphy and oraclebone scripts, the earliest known form of Chinese writing that dates back 3,000 years.

Zao's father, a wealthy banker and collector of antiques and works of art, accumulated an assembly of oracle bones bearing inscriptions, and his meticulous study of them nurtured his son's early interest in these primitive characters of China.

Zao introduced the simple, clear forms of these petroglyphs into his paintings to develop his oeuvre. 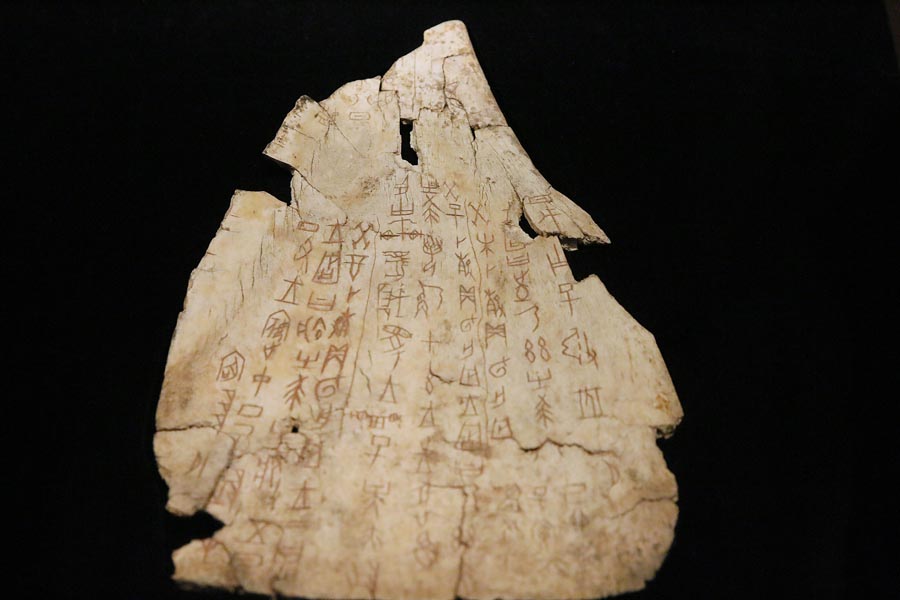 An oracle bone with inscriptions about a Shang era king's concerns with praying, hunting and weather. [For China Daily/Jiang Dong]

By doing so, Zao sought to find a resonance with the highly expressive, minimalist style of modern art to build a communication between the Eastern spirit and Western culture.

Zao's oracle bone series raised his profile in international art circuits. Although he soon moved on to explore a much more abstract style, the simple, mysterious beauty of the pictorial symbols from these ancient bones continued to be an evocative theme in his paintings.

Zao utilized his strokes in oil pigments to convey the charm of the oracle bone scripts to people outside of China. Curators at the National Museum of China have made similar efforts to provide access to today's audiences to this ancient system of writing in a number of ways.

Like Zao, who was inspired to create his oracle bone series of paintings that are avidly collected by museums and private buyers around the world, contemporary artists and designers have found ever more diverse ways to bring about a modern revival of the oracle bone scripts.

The Beijing museum has mounted an exhibition which runs through December 22 to mark the 120th anniversary of the discovery of the oracle bones.

Oracle bone inscriptions were the religious records kept by the people of the Shang (c. 16th century-11th century BC) and Zhou (c. 11th century-256 BC) dynasties. They also provide important clues to the formation of Chinese characters and the grammar of Chinese language. They were added to the UNESCO Memory of the World register in 2017.

The National Museum is displaying more than 190 oracle bones and archaic bronze artifacts, pottery works and carved jade objects pertaining to the history of the Shang and Zhou eras, largely drawn from its own collection but also from other cultural institutions, such as the National Library of China and the Nanjing Museum. The inscriptions on the bronze vessels and jade pieces display the continuous influence of the oracle bone scripts through the centuries. 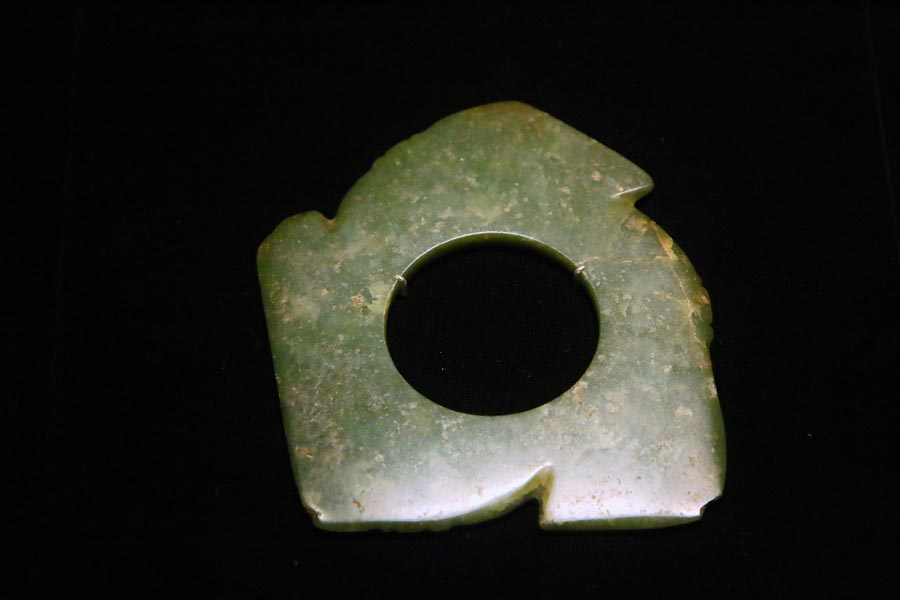 The exhibition, Zheng Gu Ze Jin, addresses the significant meaning of the oracle bones to the past and present of an ancient, continually evolving civilization. Zhao Yong, the exhibition's chief curator, says, "Zheng gu literally means 'testimony to history', and it shows how the oracle bones are the well-preserved written records from the early phases of Chinese civilization, and are duly recognized as evidence of ancient Chinese culture.

"And ze jin ('benefiting today') conveys how the symbols on the oracle bones developed into the characters and words that are still being used today, and have an important influence on the values, the ways of thinking and the aesthetic ideas of modern Chinese people."

Zhao adds that the exhibition also offers archaeological and academic findings for visitors with a scholarly interest, which will add to their understanding of the oracle bone scripts and the history of the Shang Dynasty. Moreover, he says for people with little related knowledge, the exhibition paints a vivid picture of the events affecting the ruling classes of the Shang era and highlights their concerns for the future — as the royals and the wealthiest in society took part in fortune-telling rituals more often than others.

Psychics carved or painted symbols on cattle scapulas, tortoise shells or rhino bones, and seared them in fires to predict the future. This method began to Decemberline with the rising popularity of referring to the I Ching, or Book of Changes, during the Zhou Dynasty.

The symbols that have so far been Decemberiphered show how people asked seers a wide range of questions to help them make important Decemberisions in their lives — from the most stately of royal issues to problems affecting ordinary people. For example, while the king asked advice on finding a safe path for hunting and on whether there would be a good harvest, a man wanted to know if his wife would give birth to a boy or a girl, or what was the best day to bring his oxen to market. Another oracle bone from the same era. [For China Daily/Jiang Dong]

The practice was gradually replaced by other fortune-telling methods and eventually vanished. It was only brought back to light 120 years ago when the oracle bones were rediscovered and initially mistaken for medical remedies. Interest in them was reignited among historians and scholars, as tens of thousands of inscribed oracle bones were dug up from the Yin Ruins in Anyang, Henan Province. Among them was Luo Zhenyu, the late philologist and oracle bone collector, and several objects from his collection are currently on display at the National Museum.

Chen Nan, a professor of Tsinghua University's Academy of Art and Design, has invigorated the life of these archaic symbols by featuring them in the emoticons he develops and the artworks he creates. His works are also being displayed at the exhibition at the National Museum.

"The oracle bone scripts, as an earliest known and mature form of Chinese characters, present the beauty and uniqueness of a language that has been passed down consistently," Chen says.

"And aided by new forms of technology, they have regained vitality.... We should therefore endeavor to rekindle the life of these beautiful ancient scripts, making them grace our lives and carry forward our cultural traditions."