With a number of erhu-themed events held in Meicun, the ancient town in the Wuxi National Hi-Tech District is a central stage for erhu performing arts. [For China Daily]

When studying the modern history of erhu, a two-stringed Chinese musical instrument, Wuxi in Jiangsu Province is a place that researchers can't ignore.

Meicun, an ancient town located in the Wuxi National Hi-Tech District, or Wuxi new area, stands at the core of the production of erhu and is also a hub for erhu performing arts.

Meicun, as well as Wuxi, is associated with many renowned artists, craftsmen and their stories. And erhu has become the cultural symbol of the town and the city.

One of the local legendary figures is Hua Yanjun, whose masterpiece Erquan Yingyue, or The Moon's Reflection on the Second Spring, is among the most frequently played erhu solo in China.

Hua, also named Abing, was a folk musician born in Wuxi in 1893. He learned to play the erhu and other instruments from his father.

Hua showed great talent when he was a teenager, but the talent did not earn him a decent life. After the death of his mother and father, he became homeless and had to play on the streets to make money.

Adding to his misfortune, he developed a serious disease and became blind. He died in poverty in 1950. And Erquan Yingyue was a reflection of his life.

The style of this piece displays an intense folk character. At the same time, it portrays the hardships, trials and tribulations of the composer's life. A soft and fluent melody combined with a profound inspiration conjures up the composer's sense of dissatisfaction and bitterness in his world, and also reveals his longing for a better life.

In addition to Hua, Wuxi is the hometown of more than half of the top erhu artists in China over the past century. 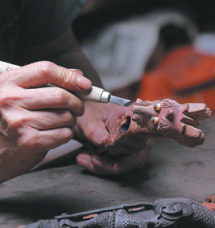 A master erhu maker carves a dragon with a piece of old mahogany, which will be used as the neck head of erhu. [For China Daily]

Sharing a similar reputation with Hua is Wuxi's native Liu Tianhua, who was the leader of the modern, academic school of erhu artists in China. His masterpieces include Beautiful Night, Autumn Moon over the Han Palace and Marching on the Bright Road.

Today, such masterpieces by Hua, Liu and other musicians are not only popular in China, but have also impressed audiences from around the world.

Ozawa was invited to serve as the conductor at the China National Symphony Orchestra in 1978.

He was then asked to lead a string ensemble based on Erquan Yingyue.

After hearing the music, the veteran conductor said he was deeply touched by the pathos of the piece, according to a report in Japanese newspaper Asahi Shimbun in September 1978.

"Bursting into tears, Ozawa said 'one should kneel down to listen (to the music)'," the report said.

Thanks to the influence of the famed Japanese conductor, Erquan Yingyue immediately became a classic on the world stage of music.

Artists from Wuxi have also played an important role in promoting the local musical heritage to the world.

Hu Jiandong, a renowned erhu player from Wuxi, staged a solo concert in Vienna in 2008, featuring masterpieces by erhu masters from Wuxi. The event further contributed to the understanding of Chinese music among audiences in the West.

He is also the "image ambassador" for the erhu production and performing industries in Meicun. 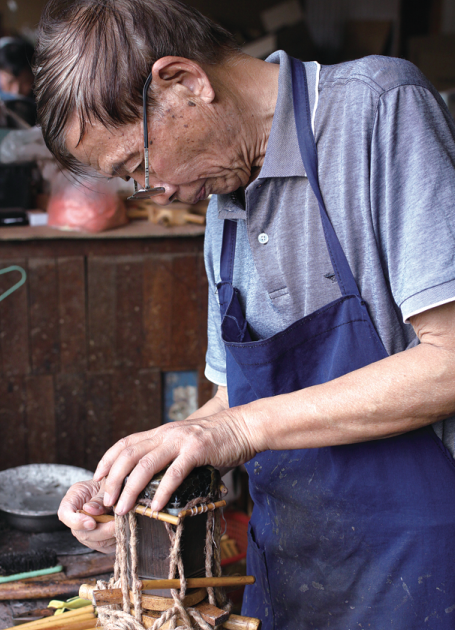 Lu Linsheng, a famous erhu designer, shows how to make the instrument. [For China Daily]

A hub for erhu

In Wuxi, the boom of erhu music arts is closely related with Meicun, according to Wan Jiang, deputy chief of the Wuxi new area's publicity department.

In Meicun, which is also known as Meili, there are a number of time-honored companies where skilled craftsmen still use ancient techniques to make the authentic Chinese erhu.

One such company is Guyue Qinhang, owned by master erhu maker Wan Qixing.

Wan, who has been in the industry for more than 60 years, is a legend of the town.

Wan is a believer of the idea that "one is never too old to learn". He became a student of master erhu maker Lyu Weikang in 1999 to improve his skills, which led to the creation of the famous local erhu brand Wan's.

"Selecting the right materials is crucial in making a premium erhu," Wan said.

He uses hardwood varieties such as mahogany and Indian sandalwood to make the long neck of the erhu, while the cover of the body is usually made of python skin.

Despite the high costs, premium erhu instruments are always highly sought after by professional artists.

Over the past six decades, Wan has made great efforts to pass down his skills and techniques to younger generations. Today, a number of local erhu makers are students of Wan.

Wan's erhu instruments are currently sold in China, as well as in overseas markets including Japan, Singapore, Malaysia, Europe and the United States. 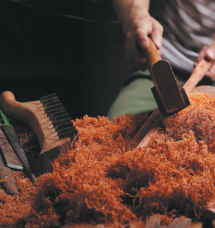 The erhu neck is made of expensive hardwood. [For China Daily]

While top makers like Wan's are using traditional techniques to make upscale products, companies targeting the medium and lower-end markets are using cost-effective, environmentally friendly materials and techniques in the production.

Huang Jianhong, general manager of the company, admitted that erhu made of the new material lacks a sense of "depth and broadness" compared with traditional products.

"However, it is enough and suitable for amateurs and beginners," Huang said.

Zhang Xiaoming, Party secretary of Meicun township, said the innovative alternatives by makers like Wansheng are in line with the sustainable, environmentally friendly requirements of the industry.

He called for more efforts in searching for higher-quality materials that can be used to produce erhu for the upper-end markets.

Meicun produces about 25 percent of all erhu instruments for China's medium and high-end markets, according to the local government.

The town is also the hub of Wuxi's erhu performing arts.

Since 2011, Meicun has been the permanent host of China's highestlevel erhu performing event. In 2012, the Erhu Culture Park, a facility for erhu production, performing, training and related cultural activities, was launched in the town. 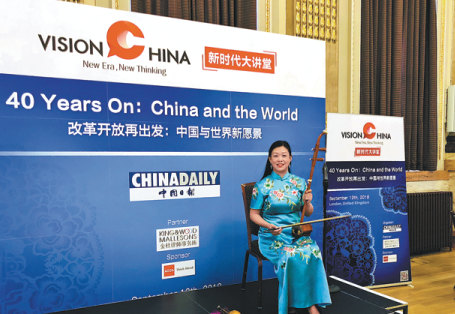 Using an erhu made in Meicun, a Chinese erhu artist plays during the Vision China event in September 2018 in London. [For China Daily]