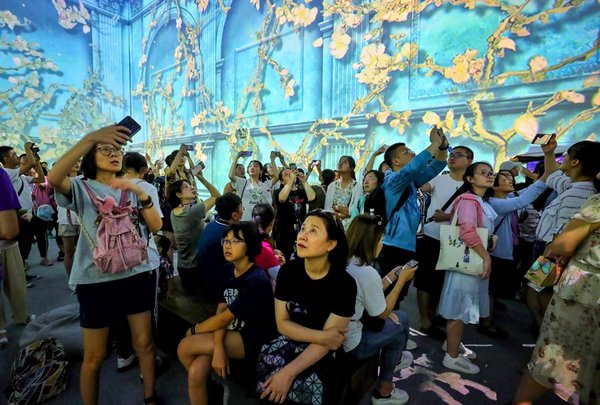 Visitors are surrounded by a projection of art by Dutch post-impressionist painter Vincent Van Gogh at a National Museum of China exhibition in Beijing on Saturday. The exhibition presents digitized versions of over 200 of the artist's works. [For China Daily/Jiang Dong]

The artworks of painter Vincent van Gogh are vividly brought to life at an immersive digital exhibition in Beijing, Lin Qi reports.

Sunflowers gently wave in the breeze, windmills start to turn, and sitting in front of a canvas, an artist selects a color from a pile of paint tubes.

Then, the scene suddenly changes: A vase of blooming flowers appears and the water inside starts to overflow before turning into a stream.

These easily recognizable elements from Vincent van Gogh's paintings have been digitalized, animated, rearranged and projected onto the ceiling, walls and floor of an exhibition space that draws the audience into an immersive look at the life and inner world of the Dutch artist.

This engaging encounter created via a sound and light show is the focus for Van Gogh: The Immersive Experience, an ongoing exhibition at the National Museum of China that runs through Sept 22. Technicians have used cutting-edge technology to bring to life the work of the gifted artist through an all-encompassing projection display of images taken from more than 200 paintings and drawings from the artist's oeuvre. 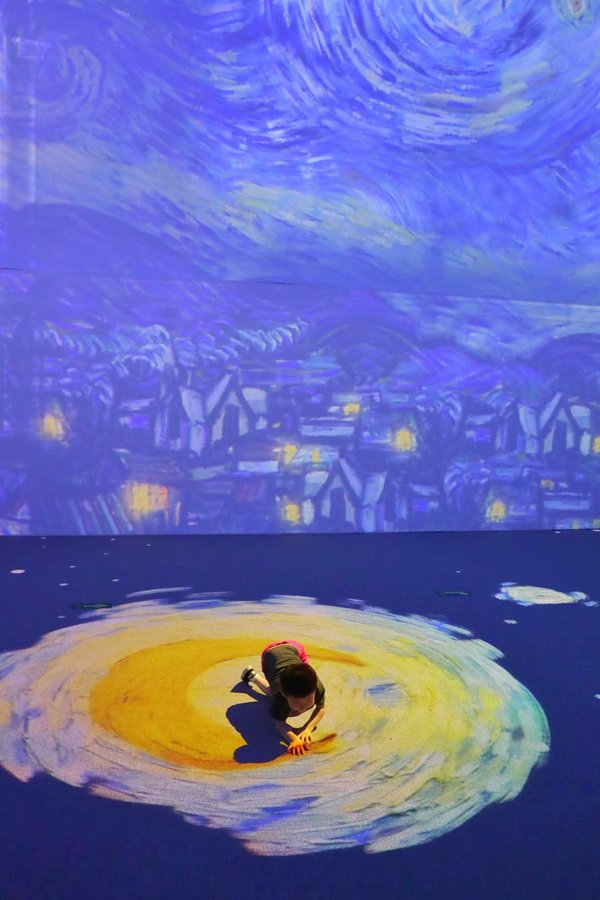 The 35-minute show is being staged inside a purpose-built rectangular box occupying a section of the spacious third-floor corridor of the National Museum of China.

The viewer first encounters Van Gogh through a space set out like a gallery, in which the painter's self-portraits are displayed on wall-mounted screens. Then the gallery changes into different scenes inspired by Van Gogh's iconic works, where viewers "step inside" these familiar landscapes. One moment, viewers are surrounded by blossoming almond trees, while the next, they watch crows flying over expansive wheat fields. Overhead, a dreamy, starlit night sky unfolds.

In recent years, Van Gogh has been the subject of many popular interactive exhibitions at home and abroad, where digital technology rather than the original paintings are used to offer an insight into the painter's life and art. 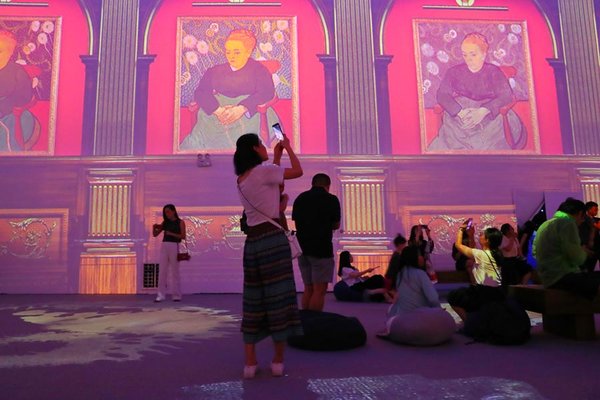 Mario Iacampo, president of Exhibition Hub, a Belgian company that specializes in creating, producing and distributing interactive shows like the current exhibition, tells China Daily that Van Gogh's paintings — which often depict expansive scenes and natural landscapes — are ideal for digital projection onto large surfaces like walls and floors, as are the vivid and innately eye-catching colors found in his works.

He says new developments in technology "completely change the way people access art" by bringing images of famous works to life through animation and offer a better understanding of the context surrounding them.

"The project provides a lot of animation and reinterpretations (of the featured paintings)," Iacampo adds. "The experience is unique to the venue where the exhibition is presented. We add things or make changes according to the specific environment where the show is staged." 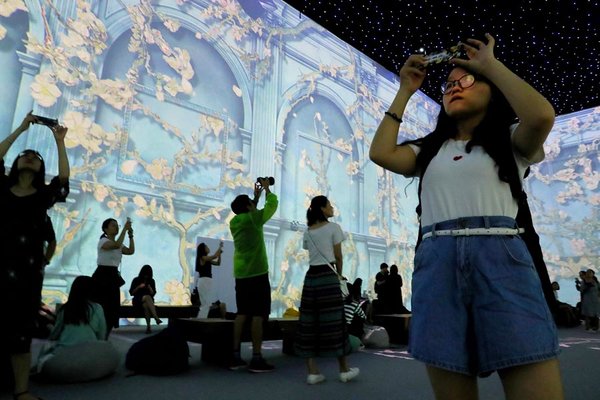 For example, when the show was staged in the Basilica of San Giovanni Maggiore in Naples, Italy, in 2017, Iacampo's team used 3D scanning and mapping techniques to match their designs to the interior of the historic structure, replicating their column designs with the real ones in the church.

Also on show at the exhibition at the National Museum of China is a re-creation of the subject of Van Gogh's noted painting, Room at Arles. The painting depicts his bedroom, one of several rooms he rented in the building known as the Yellow House in Arles, southern France.

The painting is striking because of the contrast between its bright colors and sharp angles. The room is also a testimony to a meaningful period in Van Gogh's career: Not only did he aspire to more freedom to his painting in Arles, but also, he invited his painter friend Paul Gauguin to stay and work with him. The relationship between them gradually became tense and ended in tragedy when Van Gogh cut off his left ear lobe. 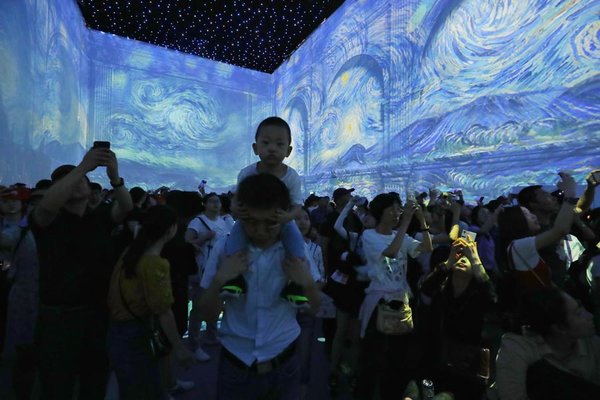 Beijing is the first Chinese city where the exhibition is being held, Iacampo says, but the company hopes to take the show to Shanghai, Chengdu and Guangzhou, and details are to be confirmed with local exhibition providers.